Richard Marcis about us…

The Wines of Leone de Castris: A Fresh Take on Tradition

History of the Winery

The Salento district is located in the southern part of Italy’s Puglia region, in the peninsula that forms the heel of the “boot” that constitutes geographic Italy. This sun-drenched area has for millennia produced vast quantities of wine. Blessed with abundant sunshine, sparse but adequate rainfall and refreshing Mediterranean breezes, the Salento Peninsula is in many respects an ideal environment for grape growing and today is, as in centuries past, rich with vineyards and olive groves.

But for too many years most of the wines from the Salento region were at best uninteresting, dark and robust but often flabby, lacking definition and character. However, new approaches to winemaking fostered by new generations of quality-oriented producers and enthusiastic entrepreneurs have revitalized the wine scene and the Salento today is the source of some of Italy’s most exciting wines.

The Leone de Castris winery has played a leading role in the revitalization of the Salento’s extensive wine industry. Situated in the small, rural town of Salice Salentino, the Leone de Castris winery is one of the top producers in the Salento area and the Puglia region overall. It has extensive vineyard holdings scattered throughout the Salento area and produces a wide range of interesting and reliable wines all of which rank high on a quality-to-price basis. It also year after year turns out a number of award-winning, internationally-recognized wines from native varieties.

The history of the Leone de Castris winery is closely entwined with that of the Salento region in general. The winery was originally established in 1665 by the Spanish Duke Oronzo, Earl of Lemos, following a visit to the Salento region. Enchanted by the area and its potential, he subsequently purchased land in and around what is now the town of Salice Salentino and set about planting grape vines and olive trees. He shortly began producing and selling his wines and olive oil.

With this rich heritage the Leone de Castris winery is the oldest and arguably the most distinguished winery in Puglia.

Although the estate has produced wines for centuries, the modern era of the winery dates to 1925 when Piero Francesco Leone married Anna Luisa Fillipa de Castris, thereby linking through marriage two of the area’s most prominent families. Piero set to work renovating the vineyards and updating winery operations by installing and implementing modern equipment and technologies. Whereas the winery had previously sold its wine in bulk, he started bottling and selling wines under the estate’s label.

In 1943 he introduced what is perhaps the estate’s most famous wine “Five Roses”, the first rosè (or rosato in Italian) wine produced and bottled in Italy. The Five Roses is comprised of Negroamaro and Malvasia Nera grapes and is named in honor of the fact that over several generations various members of the Leone de Castris family have each been blessed with five children.

In the late 1960s Piero’s son, Salvatore, assumed management responsibilities for the winery’s operations. An astute businessman, Salvatore greatly expanded the market for the estate’s wines both throughout Italy and internationally. In 1996, the winery produced its first Primitivo wine.

His son, Piernicola, in turn succeeded Salvatore in the late 1990’s and currently serves as the Managing Director of the family company. Under his helm the winery has achieved increasingly prominent international recognition and accolades.

Piernicola oversees a large and diverse corporate organization. The estate has approximately 625 acres under vine spread throughout various provinces in the Salento area. The winery produces approximately 2.5 million bottles of wine a year the majority of which is exported to over 50 countries. The head winemaker, Marco Mascellani, is assisted by Riccardo Cotarella, one of Italy’s most highly-regarded consulting winemakers.

The winery’s primary focus is on wines made from native varieties of the Salento area such as Negroamaro, Primitivo, Malvasia Nera, Verdeca and Aleatico. With its extensive vineyard holdings, it produces a wide variety of red, white and rose DOC wines that include Salice Salentino, Copertino, Primitivo di Manduria and Locorotondo wines. It also produces IGT-designated Salento and Puglia wines as well as some sparkling white and rosato wines.

The Winery and Facilities

The Leone de Castris headquarters is located in an unprepossessing industrial building in the center of the small town of Salice Salentino. Once buzzed inside, one enters an entirely rarefied environment that has the feel of an old English drawing room. The reception area is formal and dominated by a long, polished wood counter behind which sit a bank of desks manned by staff in business attire. The walls are wood-paneled and chockablock with awards and historic winery and family photos.

The next room is a conference room with wood-paneled walls, a long wood conference table and walls lined with shelves of books and memorabilia. It has the feel of an old, formal but welcoming library. A large portrait of Maria Luisa Filippa de Castris, the matriarch of the family, dominates the side wall.

The winery’s polished and ultra-modern production and cellaring area covers a relatively large area that includes a complete bottling line and packaging area. Barrels of various sizes, from botti to barriques, are 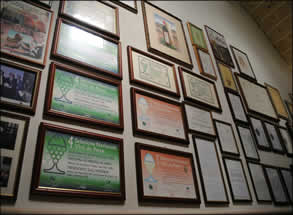 available for view in a climate-controlled ageing room. Further on is a wine museum that recounts the milestones of the three-and-a half century history of the winery as well as the history of wine in Puglia in general.

The company also has an elegant hotel, Villa Donna Lisa, where the company hosts its corporate guests as well as other winery visitors. The hotel includes a restaurant and swimming pool. 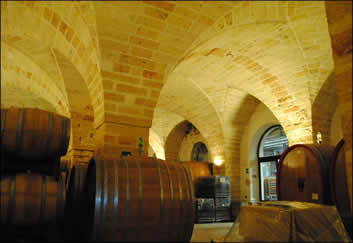 accompanied by appetizers and various luncheon dishes. Bright, cheery and tastily furnished with affable and wine-savvy personnel, it is a perfect environment for sampling wines in an upscale and unhurried environment.

It is here that my wife and intrepid traveling companion, Julie, and I had a chance to sample some of the estate’s signature wines.

The wines tasted are presented below in the order they were sampled.

This white wine is made entirely of Verdeca, an ancient variety with Greek origins that today grows almost exclusively in Puglia. The Messapia is fermented and aged in stainless steel tanks to retain the aromatic qualities and freshness of this little-known variety. It is fresh, aromatic and delicately-flavored with various citrus flavors complemented with lively acidity. This wine pairs well with light dishes such as salads, lightly-sauced fish and chicken dishes and is delicious with seafood appetizers featuring mussels, shrimp or crab.

The “Five Roses” is the estate’s flagship wine. Created during the tumult of World War II the Five Roses was the first rosé wine produced and bottled in Italy and it subsequently found a ready market in the U.S. after the war.

This Negroamaro-based rosé (or rosato in Italian) has a vivid pink color and radiates delicate yet energetic red berry and floral aromas. These delightful notes are complimented by a velvety texture and structure packed with strawberry and peach flavors backed up with a lively acidity. This very engaging rosé is hard to resist. It is an all-purpose rosé that can be served as an aperitivo but it also goes well with an extensive array of foods from appetizers, salads, risotto and seafood to pork and simple chicken dishes.

This wine is made primarily from Negroamaro grapes hand-selected from 40 year-old vines. The wine is fermented in stainless steel tanks and then aged in small French oak barrels (barriques) for 18 months. It spends an additional 6 months in bottle prior to release for sale.

This is a seriously delicious wine. It has an opaque, dark red color with intoxicating blackberry, black cherry and kitchen-spice aromas. It is medium-to-full-bodied, flavorful and complex with deep dark berry flavors and smooth tannins that provide structure and support. It has a warm finish with a touch of spice, plenty of grip and good persistence.

This delicious and generous wine comes with what I consider an extremely modest price tag of about $16.

This wine is named after Duke Oronzo, Earl of Lemos that founded the original Leone de Castris winery in 1665 and his profile adorns the bottle label.

It is made entirely of Negroamaro grapes that are partially dried on the vines prior to harvest in early October. After maceration the wine is aged in French oak barriques for one year and then spends an additional year ageing in the bottle prior to release for sale.

The 2012 Per Lui is a substantial, layered and complex wine that clocks in with 15 percent alcohol. It has a dark, dense, nearly black color and a gentle swishing of the glass releases heady aromas of rich, ripe dark fruit and kitchen spices that follow through in the flavors. The first sip when rolled around in your mouth fairly coats your teeth and tongue with jammy plum, fig and balsamic flavors accented with notes of Mediterranean herbs and spices. But it is well-balanced with good acidity, distinct tannins and plenty of grip and will age well for another 10 to 15 years.  With its structure and elegance it’s no surprise that the 2012 Per Lui received Gambero Rosso’s prestigious Tre Bicchieri (“Three Glasses”) award.

This full-bodied wine is an ideal companion for rich stews, roasts, game and aged cheeses. It is also an excellent “meditative” that is a pleasure to drink by itself or share with a small gathering of appreciative friends.

This dessert-style red wine is a real treat. It is made entirely of Aleatico grapes that are partially dried before vinification in the 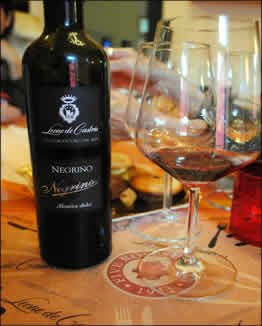 traditional passito manner. It is pleasingly sweet with floral aromas and soft, straight-forward sweet spice and red berry flavors. This wine is a perfect companion for not-too-sweet desserts such as biscotti, dried fruit and fruit pastries.

The only problem is that the Negrino is extremely hard to find in the U.S. So look for it on your next trip to Europe or Italy in particular where a 500 ml bottle generally retails for the equivalent of $18.


Warning: preg_match() expects parameter 2 to be string, array given in /web/htdocs/www.leonedecastris.com/home/en/wp-includes/class-wp-block-parser.php on line 417

Warning: strlen() expects parameter 1 to be string, array given in /web/htdocs/www.leonedecastris.com/home/en/wp-includes/class-wp-block-parser.php on line 489